Hakim Ziyech is reportedly a target for Tottenham and Manchester United according to reports from Holland. The Morroco international was one of the star players during the Dutch side run to the semifinals of the Champions League last season. 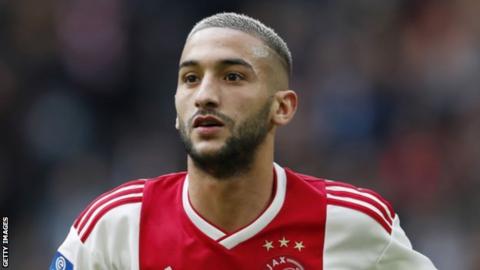 It was expected that the player would be leaving in the summer due to his low release clause stipulation. However, a move failed to materialize and Ziyech remained at the club. The 25-year-old has continued with his rich vein of form and scored a spectacular goal away to Valencia in the Champions League.

It is understood that Tottenham are keen on the forward after a disastrous start to the season for the club. The North London club appear to have stagnated with the recent run of results putting pressure on head coach Mauricio Pochettino.

However, the Argentine still has the support of Tottenham chairman Dany Levy who is expected to back him in the January transfer window. Tottenham will be looking to the morocco international to add extra impetus to an attack that has been non-productive this season.

The likes of Son and Harry Kane have yet to put up excellent performances unlike Dele Allithat has regressed in the past 12 months.

Ajax Sporting Director Edwin Van Der Saar is said to be aware of the interest on the player and have offered Ziyech a new deal. Manchester United could also be in for a move for the player as the Old Trafford club are currently in a mire.

Solskjaer is under intense pressure but the club is backing the Norwegian to get them through the current situation. From the looks of things, it appears to be a two-horse race between Tottenham and Manchester United.

It remains to be seen whether other clubs will express interest in the creative forward who has been exceptional for Ajax.